Conventional weapons and the arms trade

The UN Charter (Article 26) establishes an obligation on the Security Council to establish a system for the regulation of armaments ‘in order to promote the establishment and maintenance of international peace and security with the least diversion for armaments of the world’s human and economic resources.’ In addition, the Nuclear Non-Proliferation Treaty establishes an obligation on states to achieve general and complete disarmament, an obligation reinforced by a number of UN General Assembly resolutions. In practice, the implementation of these obligations has been left up to individual states, regions and the UN General Assembly. A step in the right direction was made with the negotiation of the Treaty on Conventional Armed Forces in Europe (CFE) in 1990, but this has since collapsed. The UN General Assembly has undertaken some measures through the establishment of a UN Register of Conventional Arms (UNROCA) and the negotiation and adoption of the Arms Trade Treaty (ATT) in 2013. The UNROCA includes reported information on arms imports and exports. The Arms Trade Treaty establishes obligations on States Parties to prevent arms transfers which would: violate UN Security Council resolutions adopted under Chapter VII of the UN Charter, break international treaties or arms embargoes, or that are likely to be used in crimes against humanity, war crimes, genocide, grave breaches of the 1949 Geneva Convention, or attacks against civilians.

Over 2,000 parliamentarians from 113 countries signed a Global Parliamentary Declaration on the Arms Trade Treaty which supported the 2012-2013 negotiations for the Arms Trade Treaty, and which was received by UN Secretary-General Ban Ki-moon in an official ceremony at the United Nations. The high level of support for the Declaration helped to galvanise broader government awareness and political will contributing to the subsequent adoption of the ATT in 2013, in addition to mobilising wider public opinion in favour of adoption of this treaty. The Declaration was launched by Control Arms and Parliamentarians for Global Action. PGA Members worldwide played a substantial role in spear-heading endorsement by a large majority of the parliamentarians who signed the Declaration.

In 1949, the Parliament of Costa Rica adopted a constitutional amendment (Article 12) abolishing the standing armed forces and ending the military as a permanent institution. Since then, Costa Rica has relied on diplomacy and international law to achieve national security and to resolve disputes between themselves and their neighbours. This new security framework also gave rise to a new foreign policy for advancing regional and international peace and disarmament, including taking lead roles in the negotiations of the Arms Trade Treaty and the Treaty on the Prohibition of Nuclear Weapons.

Guinea Bissau and Maldives: Ratification of the ATT

Hon. Dr. Suzy Barbosa, a Guinea Bissau MP and former Executive Committee Member of Parliamentarians for Global Action, undertook a number of activities to inform and engage the parliament on the issue over two years culminating in ratification of the ATT by the National Assembly of Guinea Bissau in July 2018. Dr. Barbosa, who in 2019 became the Foreign Minister, followed up the ratification of ATT with a parliamentary process including workshops to develop a national plan of action, which was adopted in October 2018.

In Maldives, former PGA Member Hon. Ahmed Mahloof, having supported accession to the ATT through a concerted outreach campaign, including in the media since 2015, and on becoming a Government Minister in 2019, successfully persuaded the Government of Maldives to accede to the ATT in 2019. 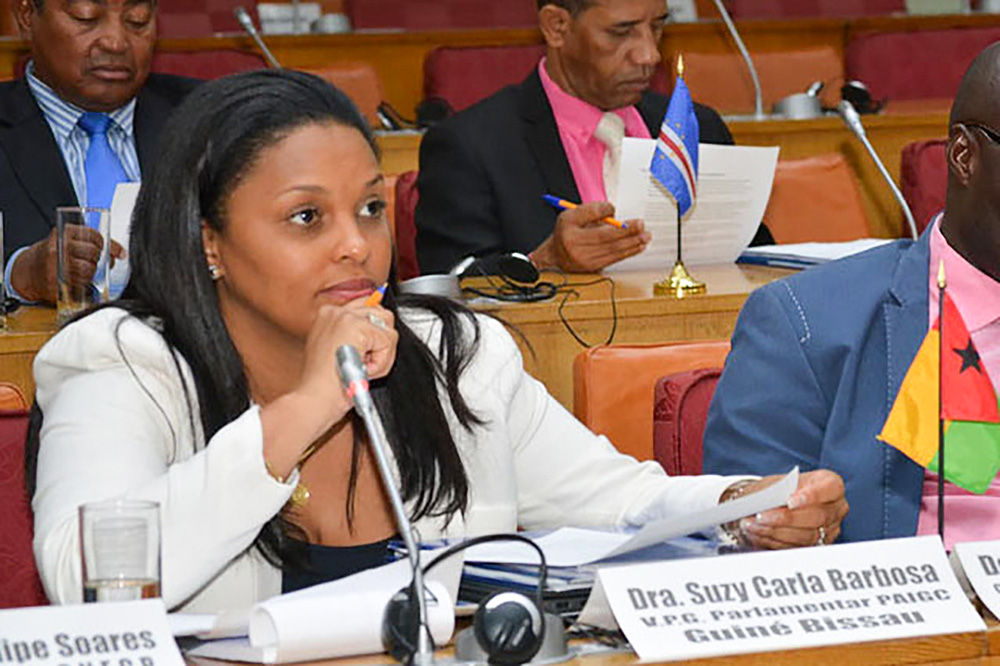 I am delighted to have been able to make progress, along with my fellow colleagues from parliament, members of the PGA National Group in Guinea-Bissau. As a Guinean citizen, I am pleased to see this development take place at a such important time in Guinea-Bissau. It brings hope to our future, and sends a positive message to the international community.

The United States is not a party to the Arms Trade Treaty* and so is not bound by its provisions. However, there are some congressional measures which restrict US military and financial support to foreign military and security forces that are implicated in the commission of a gross violation of human rights (GVHR). The most substantial of these are the Leahy Laws named after Senator Patrick Leahy.

These are two statutory provisions that apply directly to the State Department and the Department of Defense. Both departments are serious about this law, as evidenced in their detailed implementation provisions. However, the law is applicable primarily to government operations, and not to private arms sales.

*The US signed the Arms Trade Treaty in 2013 during the administration of President Obama, but the subsequent administration ‘unsigned’ the treaty in 2019 by stating in a letter to the UN Secretary-General that the US had no intention of becoming a party to the Treaty.

US Congress actions on arms sales and human rights violations

Irrespective of the position of the US Administration on the Arms Trade Treaty, the US Congress has taken action on a number of occasions to block arms sales that have a high probability of contributing to serious violations of human rights and/or international humanitarian law. In 2016, Congress adopted resolutions blocking specific arms sales to Saudi Arabia in light of the bombing of hospitals and civilian areas in their war against Yemen. These actions had some success in moving the Obama administration to cancel some of the weapons deals. In 2019, similar actions by Congress were vetoed by the Trump Administration.

The UK ratified the Arms Trade Treaty in 2014. Since then, the parliament has played an important role in implementation of the treaty. One example of this is the 2018 Report of the UK Parliament’s Committees on Arms Export Control, which followed a review of UK arms exports and imports with particular attention given to the country’s responsibilities under the Arms Trade Treaty. The report concluded, amongst other things, that: ‘in respect of open licences for exports to countries that have not signed the Arms Trade Treaty or are on the Foreign Office’s list of Human Rights Priority Countries’ the government should consider a ‘presumption of denial’ or at least ensure that there be ‘a more stringent process in place for any arms exports to such countries, so the Government will be able to show, if such arms exports are approved, that they would not be in breach of the Criteria.’

PrevPrevious pageDisarmament that saves lives
Next pageSmall arms and light weaponsNext
This page is part of Assuring our Common Future, a handbook for parliamentarians.
Download handbook in PDF
BROWSE THE ONLINE VERSION
INFO BOXES

Copyright © Parliamentarians for Nuclear Non-proliferation and Disarmament, 2020.
This document is in the public domain. Any section of this handbook may be copied and distributed provided all relevant sources are cited. Please send copies of publications containing reprinted material to info@pnnd.org.